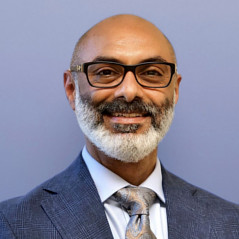 Dr. Saini is a board-certified orthodontist. He received his Doctorate of Dental Surgery from Marquette University School of Dentistry, where he graduated number one in his class. After completing dental school, he completed an orthodontic residency program at Marquette University and earned a certificate in orthodontics and a Master of Science degree. Dr. Saini also earned a dental degree (Bachelor of Dental Surgery), completed a one-year general practice residency, and served in private practice as a general dentist before moving to the United States.

Dr. Saini has won numerous awards and honors during his dental and orthodontic career. He has been inducted into many honorary organizations, including Alpha Omega, an International Dental Fraternity Award, for graduating first in his class; Omicron Kappa Upsilon (OKU), a National Dental Honor Society; and Alpha Sigma Nu, a National Jesuit Honor society at Marquette University. He also received an award from the American Association of Orthodontists for “exceptional interest in the development of the orofacial complex.”

Dr. Saini is married to Sonia, his wife of 25 years. They have two sons, Sumeet and Puneet. In his spare time, he enjoys keeping fit by running (he is a member of the Montgomery County Road Runners Club) and working out early every morning. He is an avid fan of the Marquette University Golden Eagles basketball team and Green Bay Packers!

Dr. Saini enjoys giving back to the local community. He sponsors numerous sports teams and local groups and schools.